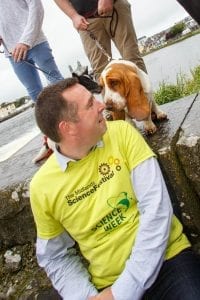 We are happy to share that his year’s programme includes two very different events which will be held in Athlone and will be open to the general public. On the evening of Nov 13th at 8:00pm, ‘The Science of Dogs, From Wolf to Woof’ will take place in Athlone Institute of Technology. This event will appeal not only to pet owners but also to anyone with an interest in animals or science in general. There’s a lot of science to the dogs in our lives, everything from how to care for them to how they think and how they evolved from wolves.

Join us for a fascinating evening with a Veterinary Scientist and an Evolutionary Biologist as they explore the world of canines. What’s it like to be able to smell not just every bit of open food in the house but also to smell sadness in humans? Learn about the secrets of their tails and their skill at reading our attention. We will also be joined by some four-legged friends along with their owners, as we seek to understand an animal that there is still so much to know about.

Fun-filled school workshops including a mobile planetarium, snakes and tortoises from the Reptile Zoo, career talks and rocket building are just some of the many events taking place across Westmeath this November as part of national Science Week for younger audiences.

We also have neuroscientist and author Giovanni Frazzetto who will deliver a free and most unique science festival event all around the ‘Science of Relationships’ and this will also be held in AIT on the evening of November 16th and booking is essential. Giovanni Frazzetto grew up on the southeast coast of Sicily and studied science at University College London. In 2002, he received a Ph.D. from the European Molecular Biology Laboratory in Heidelberg. He was one of the founders of the European Neuroscience & Society Network and the creator of the transdisciplinary Neuroschools. Giovanni has also written short stories and plays and curated science-inspired art exhibitions. We look forward to hearing from Giovanni all about the neuroscience behind the way people relate to each other and this event promises to be one which will hopefully appeal to many different people.