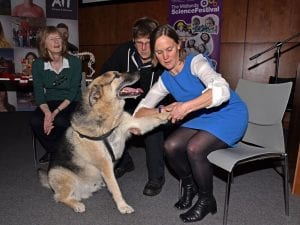 Over 100 people and two dogs turned up on Monday to hear all about the science of dogs at the Midlands Science Festival event in AIT, “From Wolf To Woof, The Science of Dogs.” Maude a Yorkshire Terrier and Jack, a German Shepherd were not mere canine audience members though as they joined the speakers at various parts of the evening  on stage to help illustrate points about dog health or their evolution from wolves. Jack, the German Shepherd was most helpful in raising his paw to help Maeve O’Reilly of AIT answer a young audience member’s question –do dogs have knuckles ? It turns out that they do ! They are just not labelled as such though. A dog’s feet have digital bones (phalanges) which basically form knuckles when clenched. Maude provided great entertainment with her perfectly timed yapping contributions which joined in with audience applause during the night, a small dog with a big personality.
The event was facilitated by science communicator Dr Craig Slattery and the discussions covered everything from the evolution of dogs from wolves to how to keep their teeth in good condition. There were many young members of the audience and they had lots of questions and prizes of dog jumpers and doggie treats were awarded to those who asked the best questions and who tweeted the best photo of themselves and their dogs.
Jackie Gorman of Midlands Science commented “we are thrilled to have hosted such a successful event in AIT and to have learnt so much about dog evolution and dog care from both Maeve O’Reilly and Kay Nolan.It was wonderful to see so many young people in the audience. Dogs have a universal appeal to people throughout history. Bones of ancient domestic wolf-dogs have been found in central Europe, the Near East and North America, where they appear to have been deliberately buried with their human companions. For example, the 14,000-year-old remains of a puppy and an elderly person were found buried together in Israel, the person’s left hand was apparently positioned so that it rested on the dog’s flank, which shows that the relationship between man and dog is one of the oldest and most durable of friendships. This event as part of Science Week in the midlands was the perfect opportunity to explore the science behind one of our most loyal companions and a prime example of the wonder of the evolutionary process.”
https://www.midlandsscience.ie/wp-content/uploads/2017/11/dr-kay-nolan-ucd-ronan-walsh-and-dr-maeve-oreilly-ait-at-the-wolf-to-woof-science-of-dogs-event.jpeg 1200 1600 Gillian Maunsell https://www.midlandsscience.ie/wp-content/uploads/2018/08/logo.png Gillian Maunsell2017-11-15 13:36:252018-08-21 08:32:23From Wolf To Woof, The Science of Dogs 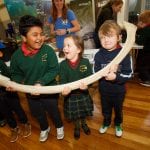 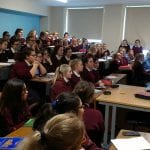