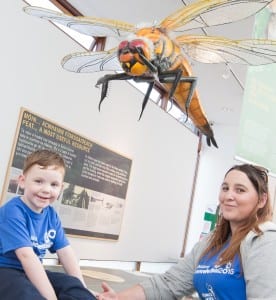 Pho to: Nathan Nally Henson and his mum, Nuala from Athlone finding out that its never to early to start learning about science and the world around us (Clara Bog Visi tor’s Centre)

The Midlands Science Festival team, welcomed the recent news that there has been a significant increase in the percentage of Leaving Certificate students sitting the science subjects of physics, chemistry and biology. This rising interest in science follows on from a recent analysis of Higher Education Authority (HEA) data which indicated a noteworthy rise in the number of Midlands students entering third level courses in Science, Technology Engineering and Maths (STEM) last year. The analysis, when compared with a similar study carried out in 2008 shows an average increase of approximately 41% in the share of students studying STEM across the Midlands during a six year period.

Lucy Prendeville, a Leaving Cert student from the Midlands achieved an amazing 8 A1’s in her exams and she said, ‘I was so delighted to receive my offer to study Nanoscience at Trinity College this week. I have loved science from a very young age and think it is so important to start encouraging pupils as early as primary school level about what an adventure it can be to explore science and all its wonders. Events such as the Midlands Science Festival ensure that children as young as five years old have the opportunity to see how certain elements of science work, but in a more fun and often lighthearted way. I dressed up as a scientist for a primary school fashion show years ago; that’s how young I was when I fell in love with science!’

SFI Discover, the education and public engagement programme of Science Foundation Ireland, organises national Science Week which aims to catalyse, guide and inspire the best in STEM education and public engagement. Heading in to their third year, Atlantic Corridor will host the Midlands Science Festival again this November with over 60 events already planned for the four counties across the region.

Jackie Gorman, Direc tor of the Midlands Science Festival said, ‘Just like previous years, this year’s festival will provide something for all ages. In particular though, we want to ensure that we are really focusing on the younger audiences as our research tells us that the earlier we can get in to classrooms to start promoting science, the better. We are really pleased to have the Reptile Zoo back again to entertain children with a variety of exotic animals and the Irish Wildlife Trust and Sustainable Energy Authority of Ireland who will be teaching children about environmental awareness through participation in a range of games and activities. We are also very excited about bringing the Exploration Dome to a Midlands primary school where pupils will learn about earth science, maths and astronomy and there are lots more workshops, shows and surprises from star gazing to bogs and insects to sea creatures right across the region this November.’

Many of the global medical technologies and pharmaceutical companies now have a dedicated presence in Ireland and it is critical that we ensure the adequate talent pool is available to them here in the Midlands. A recent report by accountants Grant Thorn ton concluded that while Ireland continues to outperform its competi tors in attracting FDI there are still issues that need to be addressed such as skills shortages within the ICT, science and engineering sec tors.

Lucy Prendeville continued, ‘Everything in today’s word is moving faster and everything, when you really think about it has a science element. If you choose science as a third level discipline you will have so many career options available to you; the opportunities are endless. We do need to look at encouraging more women in to science in particular. My course will be very male dominated and it would be great to see that changing in the coming years.’

Ibec, the group representing Irish business, welcomed the fact that the added interest in science was translating in to increased demand for third level science and technology courses. First preference applications have increased by 28 per cent for honours science degrees in the last five years.

Much of the work being performed by Atlantic Corridor in STEM promotion is as a result of relevant national links and international partnerships which have been developed and fostered over the past ten years. By continuing to work with key corporate and academic partners, the hope is that the number of students pursuing science and technology at third level will continue to rise and we can work towards ensuring the necessary human resource pool is in place here in our local economy.

Jackie Gorman continued, ‘The increase in the numbers of student taking science subjects demonstrates how people are now really listening to national messages about the many career advantages in science fields and therefore the importance of a relevant, high-value qualifications. We hope that this also means that targeted educational events like the Midlands Science Festival are starting to have real effect.’

www.midlandsscience.ie will be updating in the coming weeks so keep an eye on news of the events coming to a town or classroom near you during November of this year.