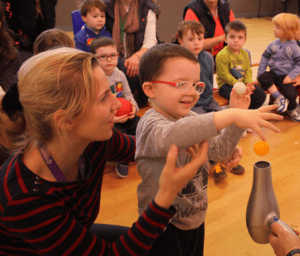 We were delighted to hear some good news from our friends in Scoil Mhuire Fatima, Timahoe,  Laois recently. Scoil Mhuire Fatima has an ASD preschool at which opened in 2014 and it caters for children who have a diagnosis of Autism.

This school has an excellent track record also have in delivering science education, having been awarded the Excellence in Maths and Science Award for the last 8 years, 8 years of BT Young Scientist Participation, 7 years of Intel Mini Scientist participation (including 4 All Ireland Awards and a private audience with President Michael D Higgins!) and almost a decade of National Science Week and Engineers’ Week celebrations. Midlands Science has been delighted to work with the school on many occasions to provide a number of science activities from the Reptile Zoos to stargazing and from physics to coding workshops

One of the Midlands Science funded workshops has directly led to the creation of a device to lessen the negative impact of sound sensitivity for children with Autism! (LULLS headphones, www.lulls.ie)

‘The children from the ASD preschool  were taking part in a fun physics workshop in our GP room. and loving it. But one little boy who loved and still loves, science, got very distressed, crying and covering his ears etc. A 14 year old past pupil of ours, Alice Carew, was helping out and she brought the little boy out of the hall. So the very thing he loved the most, he was not able to access. That evening Alice carried out some research to try to figure out the cause of his distress. She then created a prototype, trialled it with the parents of our preschool, used feedback to redesign, had it manufactured, trade-marked, and has sold over 300 pieces to schools, libraries, leisure centres and individual parents. She went on to win Scifest and Student Enterprise awards with the product. She and her friend also carried out pioneering nationwide research into the prevalence of sound sensitivity in children with autism.’

Midlands science was delighted to hear this success story of how our engagement with schools has really helped in a very different way this time and we look forward to continuing to work with the many schools and other organisations throughout the region who are striving to introduce and encourage a love of STEM to all students from as early as age as possible. 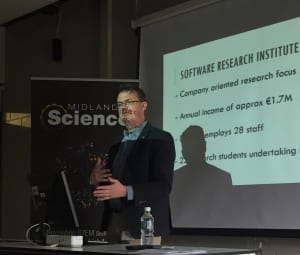 Tech Week is Ireland’s nationwide festival of technology aimed at students, parents and the public. Tech Week is made up of a range of classroom and community activities taking place across Ireland – in libraries, schools, community centres, and many other locations. These activities give students a chance to develop their interest in technology subjects, examine potential career prospects, learn new skills, be creative and, most importantly, have a lot of fun.

As part of the Midlands Tech Week celebrations, Midlands Science organised a school career presentation for the students of Gallen Community School in Ferbane, Co. Offaly. We were very fortunate to have Engineering lecturer and key speaker, Dr.Enda Fallon from AIT present to talk to students about technology fields and course.

‘We were really pleased to collaborate once again with AIT during Tech Week to deliver some very interesting talks about the world of technology to Offaly student. It is very important to demonstrate to students the vast diversity of science, engineering and technology in a practical and easy to understand manner so it was beneficial to not only have an academic representative from AIT but also to include the more fun and interactive side of science and we did this through some engaging science workshops with Declan Holmes from Science Ireland. We will actively continue to encourage students to consider the whole field of Science, Technology, Engineering and Maths (STEM) and showing them how it impacts our lives on an everyday basis during Tech Week is an ideal way to do this.’