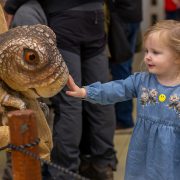 Science Week in the Midlands was back in person this year with the Midlands Science Festival, funded by Science Foundation Ireland. A wide range of activities took place including a family Discovery Day in Tullamore supported by Integra and attended by over 1,200 people!! Visitors to the discovery day were able to get hands on with reptiles from the National Reptile Zoo, learn all about slime with Anyone 4 Science, discover the science behind superheroes with Dr Barry Fitzgerald, take a journey through space with Martin and the Exploration Dome and learn all about Dinos down under with thanks to Dale Treadwell.

The National Museum of Ireland continued its partnership with Midlands Science and this year the school and family workshops and public event focussed on items in the national collection in Co Offaly and the Vikings in the Midlands.  Participants got the chance to get up close and personal with a wolf skill, viking hack silver and amber among many other things.

A swim in Lough Ree this year in association with Swim Ireland was also part of the activities. The swim was followed by food and drinks in the Lough Ree Inn and a talk by author of the acclaimed book “Blue Spaces” Dr Catherine Kelly.

Other events included exploring the science of golf in Athlone Golf Club, the science of stress and resilience with psychologist Dr Andrew Magee, the science of cats and dogs with Pete the Vet and a unique hands-on event looking at the science of sustainable living. Every participant at this event got to make a shampoo bar, a wax wrap and seed bomb to take home with them.

An event looking at the science of cosmetics, Beauty and the Chemistry Beasts, took place in Mullingar in association with the Royal Society of Chemistry. This was filmed and will be circulated online and to schools later next week.

Brian Gibson from Forensic Science Ireland and Dr Craig Slattery from UCD took part in ‘The Usual Suspects – An Evening of Crime Science’ in Portlaoise looking at the role that science has in solving crime.

Participants in the festival also looked up to the night’s sky to ponder the wonders of the universe in Lough Boora Parklands with Midlands Astronomy Club. Dead Centre Brewing was the location for ‘Hop to It’, a unique event looking at the science of beer with Prof John Morrisey, a fermentation expert from UCC.

A wide range of activities also took place in schools across the region during the week with Dr Barry Fitzgerald, Dale Treadwell and the team from Anyone4Science, to name just a few. Students in both primary and secondary schools got to explore the science of flight, Superhero Science, hands on experiments and some got to take a journey through our solar system in the exploration dome.

Online activities included a series of videos looking at the science of climate action, including a programme that Midlands Science undertook with youth club participants from the Monsignor McCarthy Complex in Athlone. Those interested in car racing were also part of the festival with an online event with driver Paul O’Connell taking apart what it takes to be a Formula 1 Driver and this event included the opportunity to win a family day in the pit with him and his team on a race day in Mondello Park. Book clubs across the region were also encouraged to take part in Science Week by reading a popular science book from a list curated by Midlands Science.

Midlands Science runs science outreach all year around to schools through its outreach programme and also runs a number of special projects such as Quiet Science, Innovate for Climate Action and Everyday Science. It reaches an average of 16,000 people per year and is supported by the Ireland Funds Private Donor Network, the Medtronic Foundation and a variety of private, public and philanthropic funders for different projects and activities.