Midlands Science’s Annual Report is now available to read online and it details another year promoting science, technology, engineering and maths to a range of audiences across the midlands.  Over 18,000 people engaged with activities, workshops and events and there was a 9% increase in female participation compared to 2020. Research on activities also found that 72% felt that STEM was important to the future of the midlands and workshops saw participants increase their interest in science by 50%. A number of activities in 2021 were focused on the science associated with climate change and climate action and research on these activities found that 75% of participants felt a greater sense of agency about climate action as a result of activities. This is an unforeseen benefit and addresses the growing issue of climate anxiety.

In 2021, Midlands Science was supported in its work by a diverse range of partners and it is grateful for the confidence shown in its work. This support allowed us to reach more people in a more meaningful way and create an awareness of the value of science to society and the economy in the midlands. Commenting on 2021 activities Chairperson Dr Craig Slattery said; “I would like to take this opportunity to thank everyone, especially so many young people for continuing to engage so wholeheartedly in science during 2021 with us. You are an inspiration to us all through your enthusiasm and curiosity.”

Midlands Science achieved Level 1 Social Return On Investment in 2021, showing our commitment to managing the social value we create. It means making better, informed choices about what we do, informed by evidence and data driven evaluation. In 2021, we received a Cathoirleach Award from Westmeath Council for our work and we also joined the European Science Engagement Association. EUSEA is an international knowledge-sharing platform and accelerator of innovation in the fields of public engagement with science. 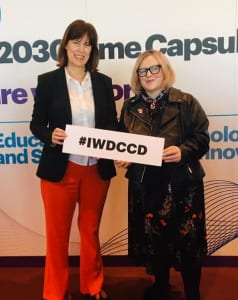 Midlands Science has this week launched its annual report for 2020. This report is presented at a time when there is more global awareness than ever before of the role of science and technology in comprehending and handling infectious disease. Against a dramatically different backdrop and as the world jointly tackles Covid-19, Midlands Science has continued to engage in valuable STEM education development work over the past year.

‘So many aspects of life have undoubtedly changed over the past twelve months as we have worked together to s top the spread of the virus. In a time of great disruption and uncertainty, we have seen everyone coming together collectively for the common good. I would like to express my sincere thanks to all of Midlands Science trustees, global and Irish partners and sponsors and all other providers and associates for their ongoing support as we work towards a well-qualified and increasingly diverse STEM skills base here in the Midlands region. We had a total of 22, 245 participants last year across all activities. As the whole world is striving to contain Covid-19, one of the things that we can be certain of is the vital role that science is playing in helping to bring this pandemic to an end.”

The ongoing global crisis has really brought an awareness to the way in which we all work, learn and consume information and is having rapidly evolving impacts on global business practices.  Midlands Science is funded by a number of public, private and philanthropic sources including the Ireland Funds Donor Network and Rethink Ireland, which provides funding and vital capacity building supports.

‘Midlands Science were awarded a Rethink Ireland grant in 2018. With the Covid-19 pandemic, we are all suddenly virus experts, generating an opportunity to continue generating interest in STEM education among young people. Midlands Science engages and encourages young people to pursue careers in science-related fields and shows them that science can be exciting and meaningful, as well as educational. It has been a privilege to play a part in their journey.”

Unfortunately, the pandemic is not yet over but as we look towards recovery, Midlands Science will continue to deliver to deliver impactful science education awareness particularly in the Midlands – working in partnership across the outreach ecosystem and with industry, Government and academia.  Details of all activities which were undertaken in 2020 are detailed in the annual report which will be available to view on www.midlandsscience.ie and we look forward to continuing this work with everyone who has a stake in realising future STEM related education development opportunities here in the Midlands in the coming years

Minister for Foreign Affairs and Trade, Charlie Flanagan, TD, commented: ‘I am delighted at the striking increase in local students seeking to pursue a scientific field. Science and related fields are crucial to building the competitive strength of the midlands and in growing our economy. I commend Atlantic Corridor’s critical work in promoting science education in our schools and higher level institutes across the midlands. The pursuit of excellence in science has particular relevance given my Government’s proposed midlands regional pilot on Action Plan for Jobs. The aim is that the pilot framework for the midlands will serve as a model for other regions and will maximise the potential for job creation in the region.’

Many of the global medical technologies and pharmaceutical companies now have a dedicated presence in Ireland it is critical that we ensure the adequate talent pool is available to them here in the Midlands. A recent report by accountants Grant Thorn ton concluded that while Ireland continues to outperform its competi tors in attracting FDI there are still issues that need to be addressed such as skills shortages within the ICT, science and engineering sec tors.