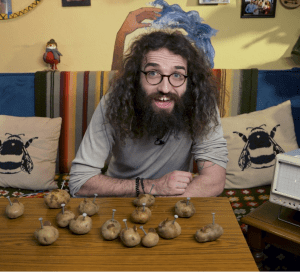 As we celebrate all things Irish for St Patrick’s Day, we thought it might be interesting to think about famous people from the midlands who are associated with Science, Technology, Engineering or Maths (STEM)

Did you know that the term “electron” was invented by Offaly man George Johns tone S toney? S toney made significant contributions to cosmic physics and to the theory of gases. S toney’s most important scientific work was the conception and calculation of the magnitude of the “a tom of electricity”. In 1891, he proposed the term “electron” to describe the fundamental unit of electrical charge, and his contributions to research in this area laid the foundations for the eventual discovery of the particle by JJ Thompson in 1897. Next time you look up, think of S toney as craters on the Moon and Mars are named in his honour. And keep looking up as you might see the Kuiper Belt which has a Westmeath connection!!

Kenneth Essex Edgeworth was an Irish army officer, engineer, economist and independent theoretical astronomer from Westmeath. Edgeworth is best known for proposing the existence of a disc of bodies beyond the orbit of Neptune in the 1930s. Observations later confirmed the existence of the Edgeworth Kuiper Belt in 1992. Those distant solar system bodies, including Plu to, Eris and Makemake are now grouped in to the Edgeworth-Kuiper Belt.

Longford inven tor Richard Lovell Edgeworth was a graduate of TCD and Corpus Christi, Oxford. He created a very useful machine to measure the size of a plot of land. He was also ahead of his time and anticipated the caterpillar track with an invention he tinkered with for about 40 years but never completed. He described it as a cart that carries its own road.
Speaking of transport, if you ever get the train to Laois, you might think of William Dargan. He was born near Killeshin, Co Laois, in 1799, was the engineer on Ireland’s first railway from Dublin to Kings town (Dún Laoghaire) in 1833. He was also the engineer for the old Harcourt Street line, which the Sandyford Luas follows for much of its journey, and he designed many of its station houses. In total he constructed over 1,300 km (800 miles) of railway to important urban centres of Ireland.

The Midlands has a strong scientific heritage on which to build on today. In 1845, Birr was the home to the world’s largest telescope, today it is the site of I Lofar, the Irish station in a European wide network of state of the art radio telescopes, used to observe the universe low frequencies. John Joly of Offaly in 1857 developed the first effective radiotherapy method for treating cancer. Today, his home town of Tullamore is home to leading life sciences company Integra Lifesciences, which makes an ultransonic aspira tor, a surgical device for the precise destruction of tissue that is used for tumour removal procedures and many other complex surgical operations.

The past allows us to learn from and to build for the future. This is the nature of science; we learn from each other and it’s a process of learning from mistakes and experimenting with new ideas. As we celebrate all things Irish, let’s celebrate all things Midlands including the amazing scientists from our region who looked to the stars, built bridges, explored cancer treatments and much more !!

Midlands Science is delighted to be featuring our Science at Home series with Dr. Dan Nickström during the St Patrick’s Festival 2021 and this will be showcased through St. Patrick’s Festival TV – SPF TV – a dedicated TV channel at www.stpatricksfestival.ie. Dr. Dan Nickström is a lecturer in the Experimental Physics Department at Maynooth University and a keen physics communica tor. He will explain the physics behind some of the everyday objects we find at home, as well as looking at the natural world such as how bees and pollina tors contribute to our ecosystem.