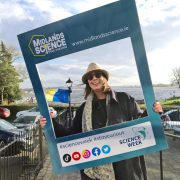 A huge crowd turned out at Coosan Point, Lough Ree, Athlone for our science week event in association with Swim Ireland. The event involved a supervised swim or a dip in Lough Ree followed by hot food and drinks in the Lough Ree Inn and a talk with Dr Catherine Kelly, author of the acclaimed book “Blue Spaces.” For many years, Dr Kelly has been researching and writing about the impact that water has on our mind and bodies and she is a particular fan of cold water and open water swimming. In a wide-ranging talk, and in the questions and answers that followed, she stressed her belief that everyone should have access to swimming and she is currently working on projects in the UK to bring swimming to communities who may not usually engage with swimming, such as people with disabilities or those from particular ethnic backgrounds.

She spoke about how she developed a new relationship with swimming and water following the death of her mother many years ago. Living in Mayo at the time near the sea, she began to think about the healing power of water. “It’s an ebb and flow that water gives us that allows us to connect with ourselves.” Her book “Blue Spaces” is packed full of great ideas of how to make the most of being in or near water, based on scientific research from around the world about the human relationship with water. She says “Being in the water brings you straight into your body. I think that’s the crux of the wellbeing benefit of water, it brings you out of your head. You cannot ignore your body when water is pounding on top of you.” She also encourages those who are interested in open water swimming to join a local community as the social benefits of swimming with other people are also demonstrated in scientific research that looks at the modern problems of loneliness and social isolation.