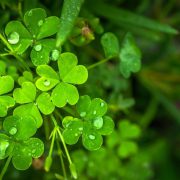 The botanist Carl von Linné in his 1737 work Flora Lapponica identifies the shamrock as Trifolium pratense, mentioning it by name as Chambroch. However, results from various surveys show that there is no one “true” species of shamrock, but that Trifolium dubium (Lesser clover) is considered to be the shamrock by roughly half of Irish people, and Trifolium repens (White clover) by another third, with the remaining fifth split between Trifolium pratense, Medicago lupulina, Oxalis acetosella and various other species of Trifolium and Oxalis. None of the species in the survey are unique to Ireland, and all are common European species, so there is no botanical basis for the widespread belief that the shamrock is a unique species of plant that only grows in Ireland.