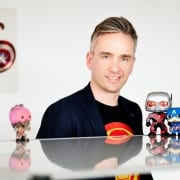 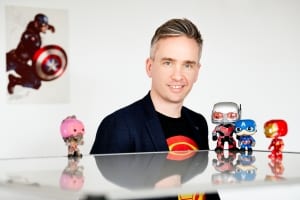 We are delighted that Dr. Barry Fitzgerald will be returning to the region for Science Week 2019 – Dr. Barry Fitzgerald is a superhero scientist, speaker, author, and enthusiastic science communica tor. His research interests include particle processing, responsible innovation, science education, scientific outreach and communication, and superhero science. For the latter, Barry aims to identify the science and technology of today that could lead to superpowers tomorrow.

Barry is the author of the popular science books “Secrets of Superhero Science” and “Secret Science of Santa Claus”. His latest book “How to Build an Iron Man Suit” is out from Oc tober 2019.

Barry is also the edi tor-in-chief of the TU Delft open access journal Superhero Science and Technology, and he has published scientific papers in a number of areas such as physics, chemistry, physiology, and education.
Barry has seen the film Avengers: Infinity War more than 40 times and his superpower will always remain a closely guarded secret.

Barry said,
‘I first presented workshops as part of Science Week in 2015 and am delighted to be back in the Midlands to celebrate science again this year. Several science themed events will take place around the country this November, providing a wonderful opportunity to explore and learn about the world of science and technology that surrounds us and there really is something for people of all ages. It is a really valuable platform for researchers and those working in scientific communication to encourage the next generation to consider science as a subject and future career option and an opportunity to inspire young people to engage with science in a fun and exciting way. I’m really looking forward to speaking as part of the Midlands Science Festival about all superheroes, science, and lots more!’

So much to explore and discover!